Hey there Zapier friends! Continuing our exploration of the Formatter by Zapier app, let’s take a look at another set of very handy functions: Extract Email & URL

We’ve all been there — we have a great idea for an automation to create in Zapier and after we have thought and created the Zap of our dreams, we run into issues with our data being rejected by one or more of the actions.

Let’s just say that in some situations if your data is too dirty, there is little hope in setting up an automation without first standardizing this data (prior to sending it to Zapier). For example, if you are collecting Google Form submissions to send into Salesforce to create Contacts but did not require the “Email Address” field to be provided and some entries are missing this information, there is nothing that Zapier could do to help you solve this issue. You would first need to fix the issue at the source by making the field required, and then update the existing records with the email addresses, and then re-trigger the Zap via our import/export methods.

For (almost) everything else, enter Formatter by Zapier!

This option can be found at:
Formatter by Zapier — Text — Extract Email Address

This transform only has one field, where you input the text from which you'd like to extract the email address.

How to Use It

When we get data from other members on our team, submitted in various ways through different methods, it is a very common issue for data to be provided in a less-than-ideal format. For example, in this screenshot of the editor, the data we were sent contains a double quote in the front of the address: 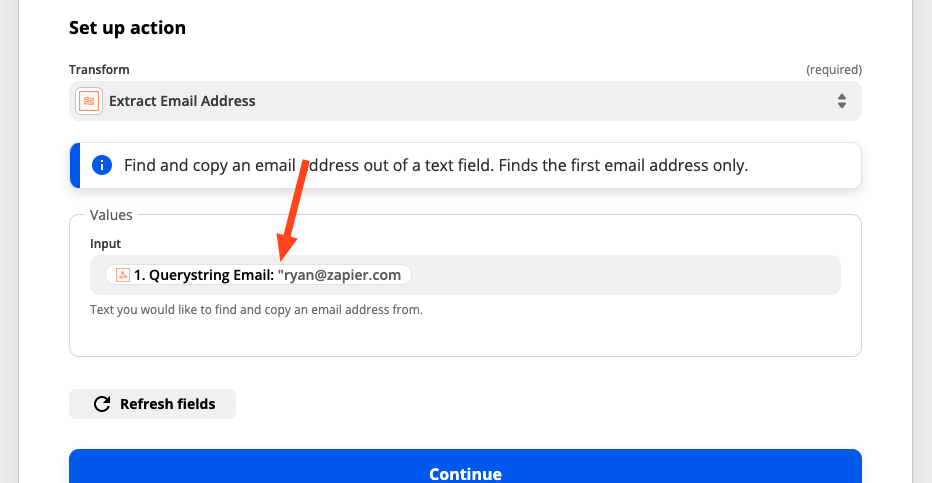 When you or I look at that, we as humans know to ignore the double quote, but if you are sending this into an action that requires an email address, the recipient API will take the data provided to it literally. If it contains a character like this, more often than not the request will be rejected due to an invalid email address.

Once we run the Extract Email Address function, we see that all of the invalid characters are removed:

This option can be found at:
Formatter by Zapier — Text — Extract URL

This transform only has one field, where you input the text from which you'd like to extract the URL.

How to Use It

The most common use of a step like this would be to take data coming from a body of an email or post to a social media app and to extract the first URL we find in the content. For example, let’s say I know in the body there will always exist a single URL, then I can map that body output from my prior step: 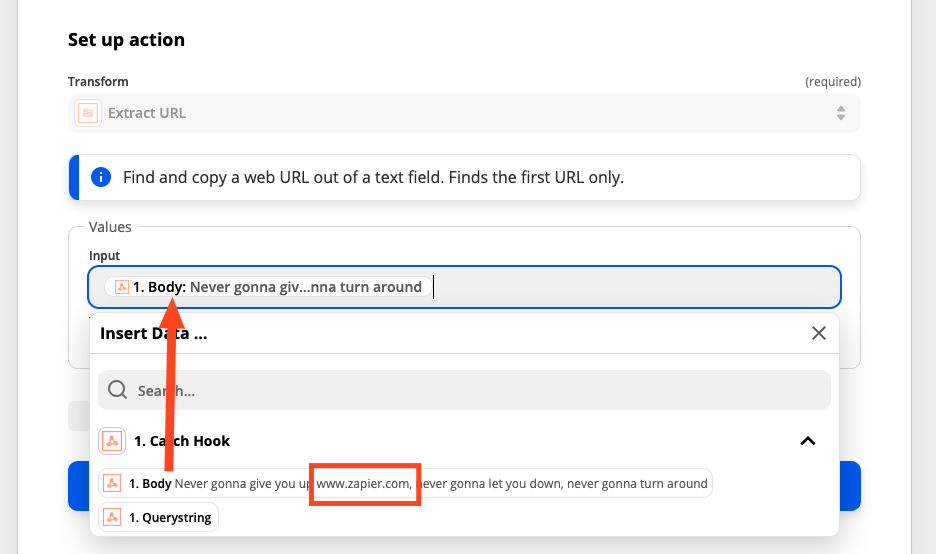 ...and then I can have access to the URL on its own, to pass into a field that requires a valid URL address as input.

In the case of dirty data, we can also use this step to not only remove any non-standard characters that may be attached to the URL, but Zapier can also pass along the URL Parameters as well should the URL include them:

Coming Up in the Series

Hope you've found this look at email and URL extraction via the Formatter helpful. Next up in the Formatter Features series we'll be taking a look at extracting numbers and phone numbers. Until then...happy zapping!