If you're like me, you find yourself testing new zaps and zap ideas constantly.

One common problem though, if you are just trying to test an Action, is that you still need a trigger!

If you try and test your Action step without a trigger, you'll be hit with one of these:

Instead of going through the hassle of setting up a trigger from an actual integration, simply use the 'Schedule by Zapier' utility as your trigger, and keep moving with your Action!

You can set it up with any day and any time, so you don't have to waste any time figuring things out, also the test will always work, so it's a very quick fix.

It might seem straightforward, but it can save a lot of time. Let me know what you use in these situations! :)

This post has been closed for comments. Please create a new post if you need help or have a question about this topic.
Page 1 / 2

yep. i do this often. I usually use the Code by Zapier trigger - there is nothing to configure, just hit next with the default code

I tend to use the "Schedule" Trigger for a lot of my testing, too! Great tip and thanks for sharing! :)

The real fix here would be Zapier allowing you to test actions steps further down the zap without needing to fully finish earlier ones (unless they are dependant on the earlier step I suppose).

Hey a lot of the time, those steps are dependent on those previous step's data, which is why we lock down that flow a bit. We purposely try to guide folks down the right path to avoid any confusion or issues later on. Great suggestion, tough! We'll have to keep this one on the back-burner to see if there are more elegant ways of handling this in the future.

What would possibly solve that issue for some of us, would be an "Advanced" option. So, us advanced people don't need as much guidance and can mess with stuff up a bit more but beginners get the full supported option.

That's a really interesting idea, I'd love to hear more about it!

What kind of features or functions would be helpful for you in this 'Advanced' mode? And do you see it being something where you could switch back and forth as you create each Zap?

I definitely want to capture some of your thoughts on this so please share as much as you'd like :)

One feature I'd love in an 'advanced' mode - and I've mentioned several times before - would be the ability to see raw JSON output when testing an action step.

Load of times I'll get an obscure error, go to support, they'll pull the raw JSON and between us we'll work out what's going on. If I could just do that myself I'd save you all a bunch of support hours/money.

I can definitely see how that would help the kind of power users that understand the kind of output a Zap will get from APIs, and want to get on and fix errors asap. There may be some tricky points around data protection (if we send the full output for a step we use a Gist, which strips some identifiers), but that doesn't mean it's impossible.

Does anyone else have any thoughts on useful features of an 'advanced' mode for Zapier?

Good question, I'm not surely exactly what I'd want to see in an advanced version (or alternatively what I'd move from the "simple" version to the advanced version to make the simple version even easier to understand). The new editor feels like a much simpler interface for coaching new people through how to use Zapier. I probably wouldn't need to switch back and forth (I'd want the simple version for coaching though).

For our own use, the old editor was fine apart from a few things that were painful like:

These steps probably aren't needed in a beginner interface.

I repeat this every chance I get, but like says, not being able to re-arrange or duplicate individual steps is a huge hassle, particularly for power users - it really should be a priority for the team working on the editor. Visual changes are nice - but tackle the stuff people are actually asking for as well please!

and great suggestions! I've made sure to add feature requests for the both of you in regards to copying and rearranging steps in your Zap. If any other advanced features stick out, please let us know! :)

To test a zap without a tigger (whoops, I mean trigger) my go-to is Webhooks by Zapier -- Catch Hook. I thought I saw this suggestion here recently, i think from , but if it was someone else, please take credit! just copy and paste the webhook URL into another browser window and press the Enter key. You can also specify query params like

and use the values in your Zap (although they will be available as querystring__key1, etc.)

This can be used for debugging, but you can also turn the zap on and then fire the trigger at will.

I've done this before and, you know, like 10-20% of the time the trigger fails to pick up the test - never worked out why.

I love that question (regarding an advanced version).

For starters, I'd love the ability to have hotkeys for things (hot key for skip to customize, skip to test, submit test and continue, etc.). You can do some basic stuff using tab and return right now, but specific hot keys would be great.

Next, with the launch of the new editor I've found that it is exceptionally handy for newbies, guiding them through each step more cleanly. However, for advanced users, it can really slow things down. I'd like a more minimalist, or even code/command-line interface to build things out super fast. This would just be an advanced view that can be turned on if requested or something like that, keeping the more robust hand-holding view for most users.

The ability to see and use a recent task inside of the editor would be really handy for troubleshooting. Instead of just using test data, actually re-running through the steps of an actual task that was stopped. Sometimes the last task can be pulled through as a test, but it can be hard to specify if you need to grab a specific instance.

Finally, a more advanced output for when a step hits an error (in the editor). Right now they can be limited to 'uh oh' or something of the sort, which can make diagnosing and fixing things difficult.

Hey thanks for sharing your thoughts with us here! I am going to make sure these all get recorded as advanced features to consider for future development as well. :)

P.S. for your last point regarding an advanced output, do you just mean better more detailed error messages? I want to make sure I'm capturing that correctly so let me know!

Yep! I would want better error messages in both the task history, as well as in the editor. Just the ability to get a raw or more detailed read-out (for advanced users) to allow us to troubleshoot and fix issues better (assuming we have the ability to). I know it's not possible in all cases, but wherever possible.

Thanks for the extra detail there! I've passed on all of your feedback around an 'advanced' Zapier editor :)

I have so many thoughts on the editor and how to improve it, like suggested, being able to re-order steps, or copy steps would make a HUGE difference in my speed to launch zaps.

Also the ability to see a recent task go through the steps (as test data) so when we implement a fix in a zap we can be sure it does the correct thing on that edge case. credit to

But for me the ability to have a path rejoin to a main flow, meaning like if this variable is X then I need to modify it like so, but if it's y then leave it alone, but after all that is done I then need to write a bunch of variables to an output including that variable. As it is right now each path needs to have the same steps in it (this is where copying steps and moving them into paths would be a handy bandaid) ... essentially it's the python DRY method, I shouldn't have to have three instances where I write the data to QuickBooks where the only thing that changes is the state tax (just an example here) so I would need 3 paths and each path has everything identical in the quickbooks step except the state tax value. -- some might call this branching or forking, but then being able to "merge" back into the trunk or a singular flow.

And finally for the advanced mode, I want to be able to jump into a step and a (sub step? -- not sure what the tip downs are called) Take a look at the two screen grabs below, while I'm working on step 4 I cannot jump to the Customize Numbers of step three without first an intermediate click on step 3 which then collapses step 4 and now I cannot see the value I needed to pull from step 3 or what ever I was looking for, also when I go back to step 4 I've already chosen my Action event, why must (in an advanced mode) I click Continue and not be able to go right to customizing the webhook. -- For me in advanced mode it would be all about minimizing clicks and the constant tip down stuff, just have it all exposed for me so I can tab through it or scroll and find the value I want to edit, edit it and get out. 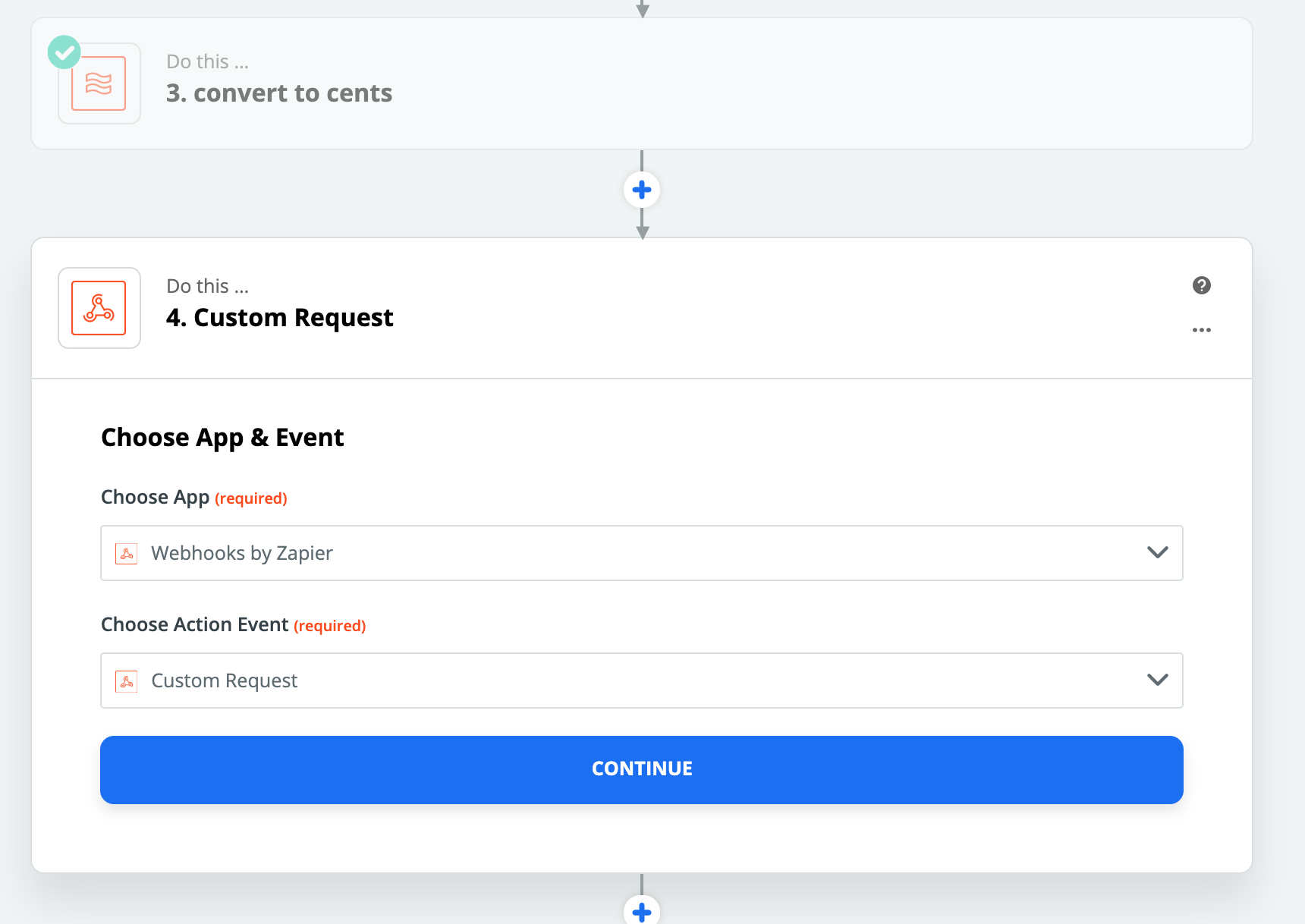 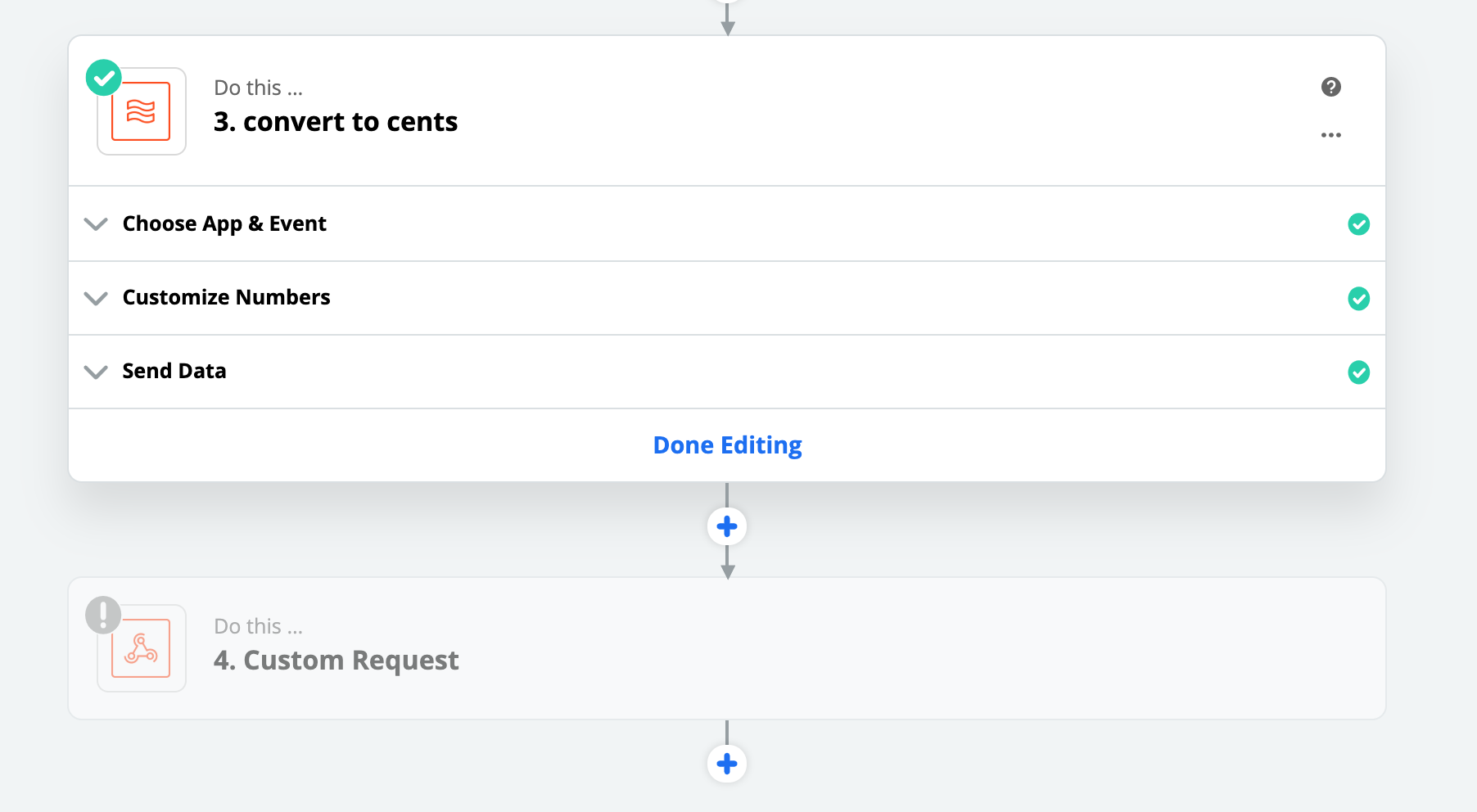 Going back to the original content here I use "Push" by Zapier when I'm just trying to test some action steps... that way I can pass values and trigger the zap whenever I'm ready by clicking an Icon in Chrome.

Oooh - I’d like to second ‘s suggestion about being able to pick a specific historical zap run and load it into the editor as test data.

Another advance feature that would be really great (and would get Zapier closer to being a fully functional visual programming tool) would be looping! That's really the only feature I've been tempted to look elsewhere for but have generally ended up using code steps instead

Thanks for your thoughts

Funnily enough we've been discussing using code steps to create loops in the Developers category of the community:

Is there a way to create a loop for multiple items in a Zap using a code step?

Hi folks, interesting ideas are being discussed in this topic!

If you want to debug an action output when testing from the zap builder, you could use Redux DevTools chrome extension (Since Zapier website is built based on React/Redux) to find the output of a trigger/search/action. Check out this screenshot. I tested this with a Code step but it should be pretty much the same for any app's action. Hope this helps. 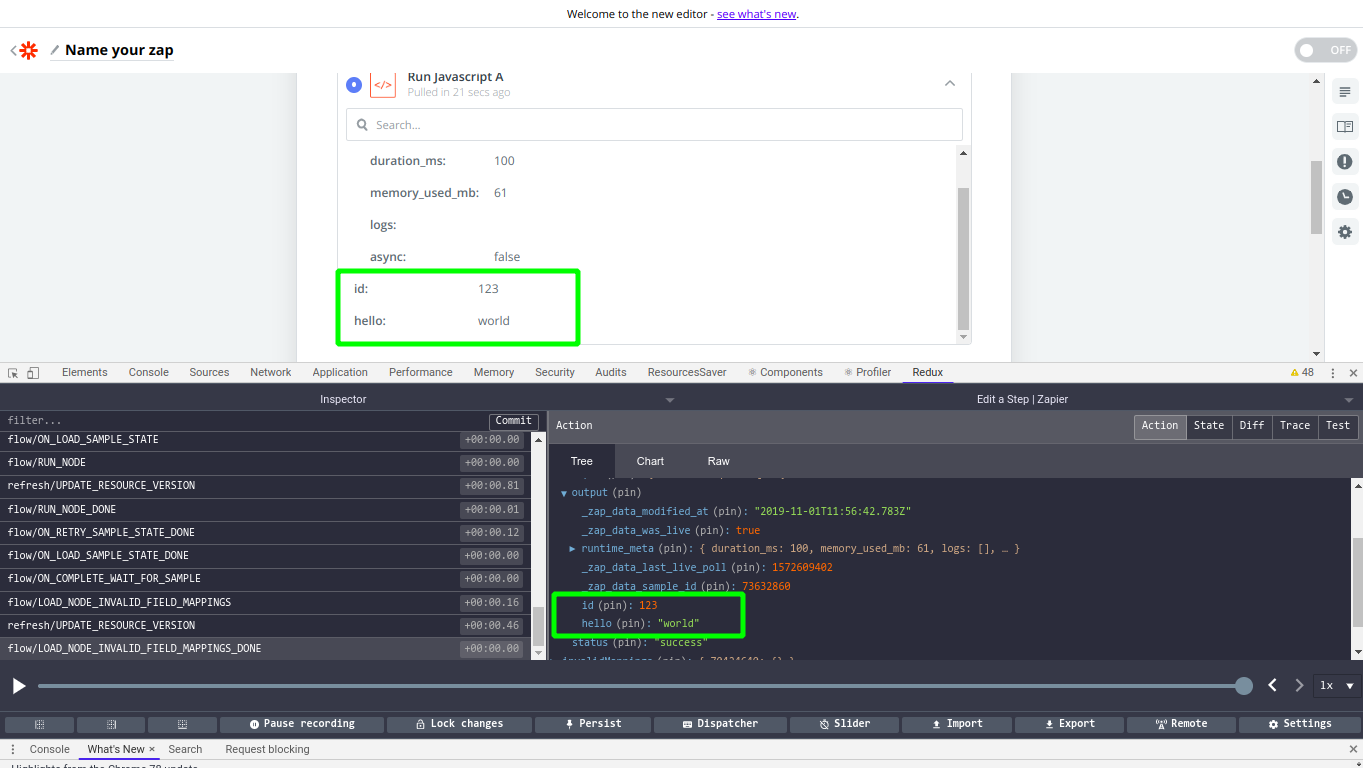 Ikbel | Building custom Zapier Apps | Want to build a custom Zapier app for an API? Visit our website: https://zapier.norapps.net Or email us at info@norapps.net
Page 1 / 2